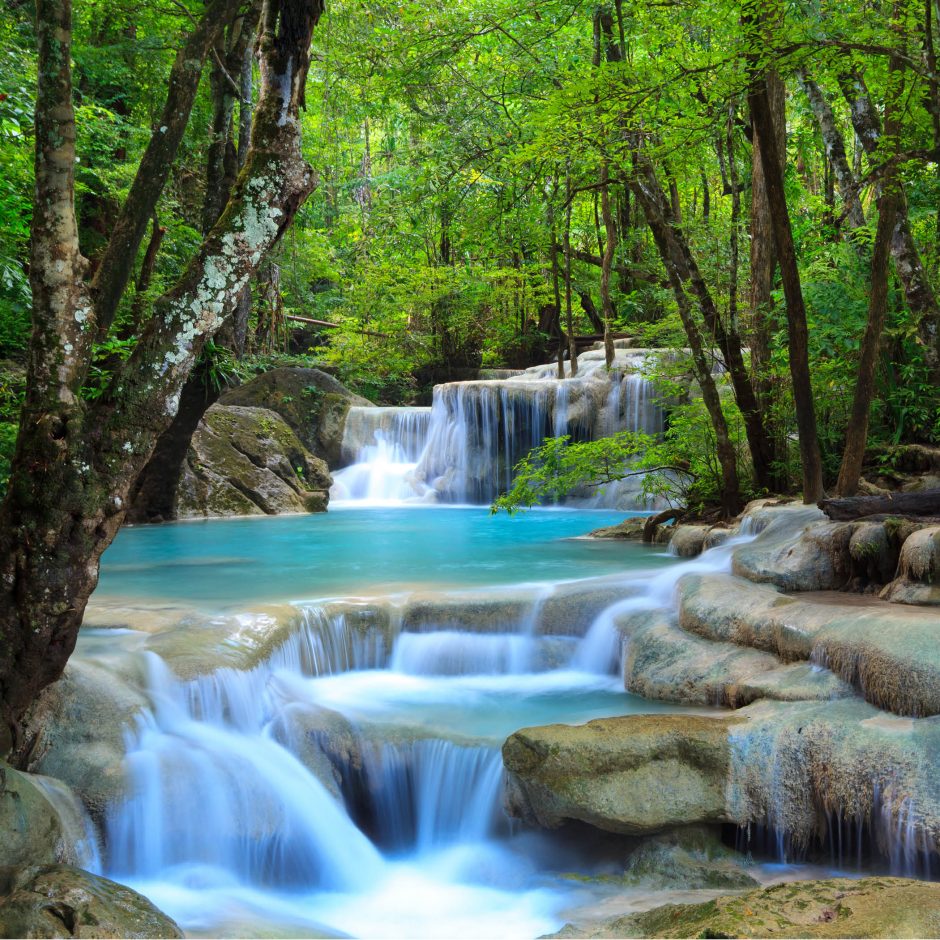 After a few great nights in Bangkok, it was time to head over to Hotel De Moc to meet everyone who will be on the Imaginative Traveller Hill Tribes and Beaches Tour with us. So, here’s the thing….

A week before we were due to fly out to Thailand we got a phone call from STA Travel (who we booked the tour through) to say that the tour we were booked on: Siam Discovery was no longer running as we were the only 2 people on it, and it was not worth it for them. So we swapped onto The Hill Tribes and Beaches Tour that was guaranteed to go that was in 2 parts – one half was spent with one group then we all joined another group. The tour was starting a few days later than our original, leaving us a few extra days in Bangkok to sort out, and it was 17 days long – meaning the trip to the Fullmoon Party we wanted to go on would interrupt with the last day of the tour. This one was a bit more physical (panic attack commence…) but was guaranteed. We were going to be in Thailand for 6 weeks anyway, so we went with it.

So, we got to Hotel De Moc and the tour meeting began. There was 1 other person on it. ONE. On the guaranteed tour. But I digress… the person we met was called Kate, who is now an amazing friend who took us under her wing in Australia. Our tour host was a local called Noi, meaning ‘Little’. He was brilliant – very informative, open and a funny guy! After a dip in the pool and a few drinks, we all got to know each other a little better and it was a fun night! 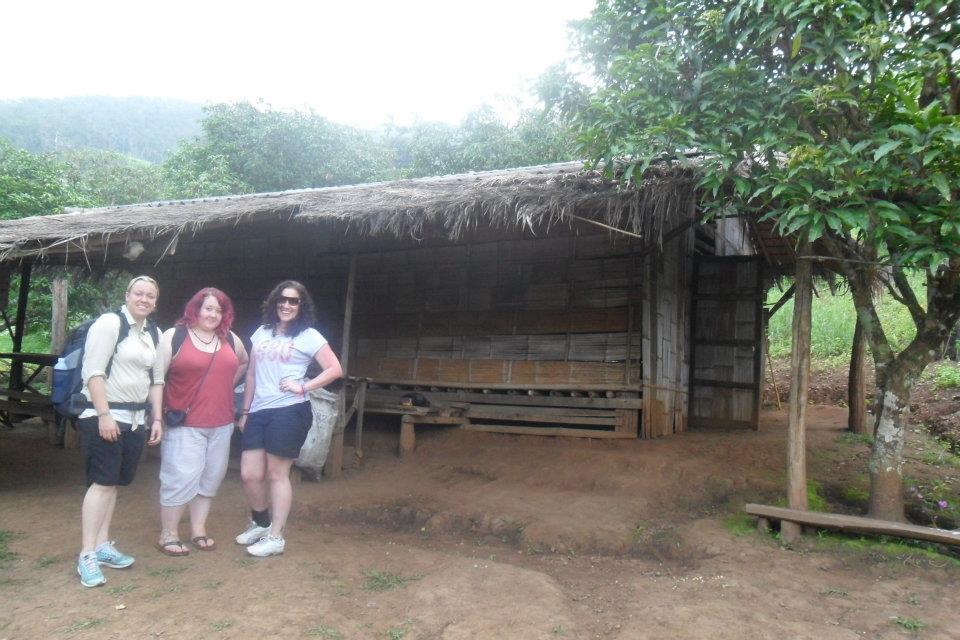 So the trip began and we spent the first day doing some of the things in Bangkok that we hadn’t already done – visiting the Grand Palace and Wat Po – the largest temple in Bangkok, housing a 46m long, 15m high gold-plated reclining Buddha! As well as Tuk Tuk rides, some amazing foodie places and a trip to Chao Praya river where we boarded a long tail boat for a tour of the local canals. It was a great day! 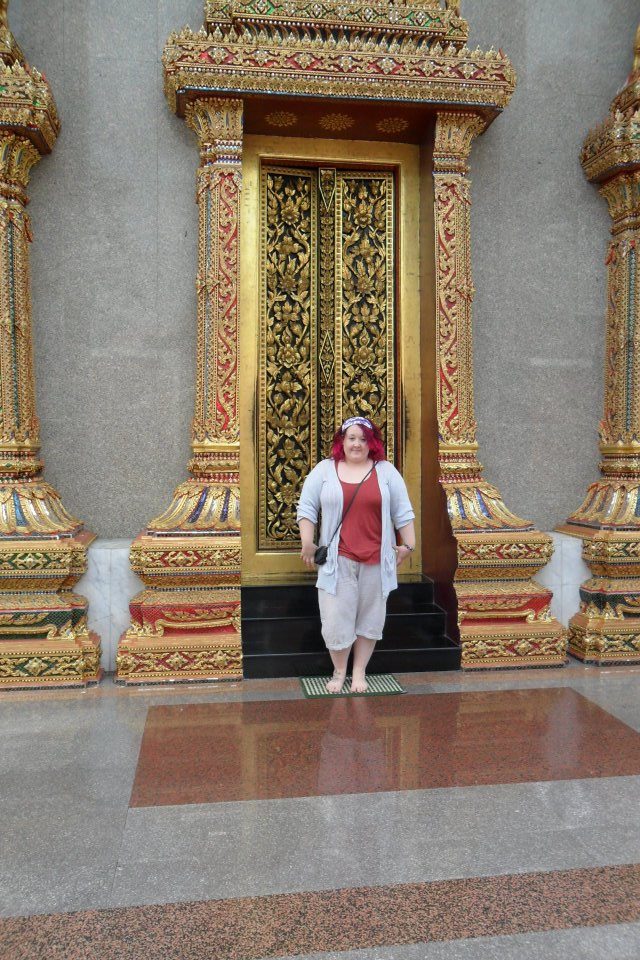 That afternoon after lunch we headed up to Kanchanaburi. We took a rocket boat to the River Kwai to visit the Bridge over the river Kwai (yes, like the film!) which was really cool, rocket boats are really fun and fast (hence the name). The Bridge over the River Kwai was constructed during WW II. when Japan constructed the meter-gauge railway line from Ban Pong, Thailand to Thanbyuzayat, Burma. The line passing through the scenic Three Pagodas Pass runs for 250 miles. This is now known as the Death Railway with a life lost for every track laid. It has an incredibly sad history for the prisoners of war and there are another 7,000 pow’s buried in the nearby Kanchanaburi War Cemetery that we visited. It’s such a quiet place, but you can tell just how much the Thai people respect the buried soldiers from how well preserved the cemeteries are. 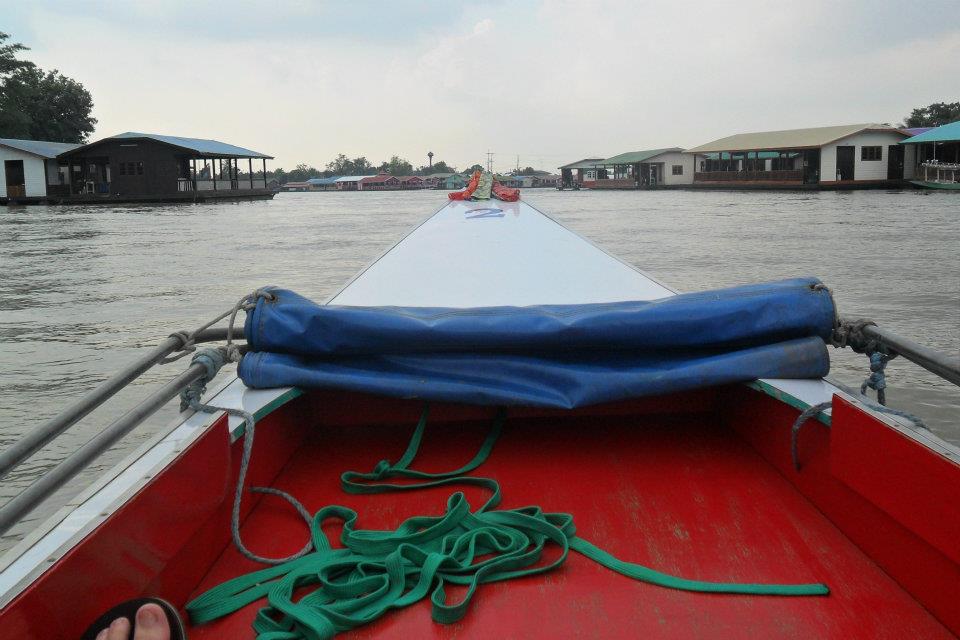 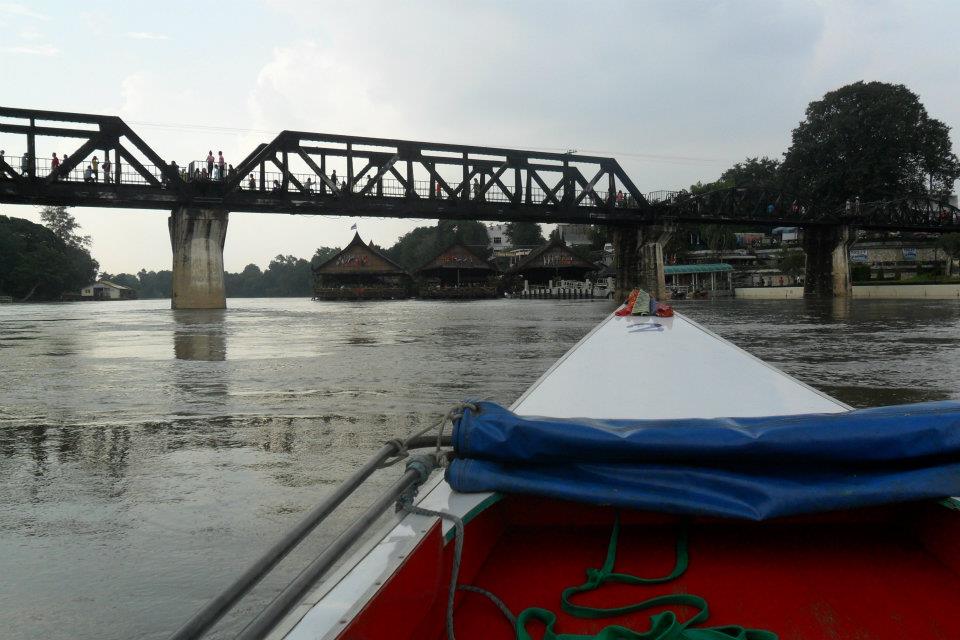 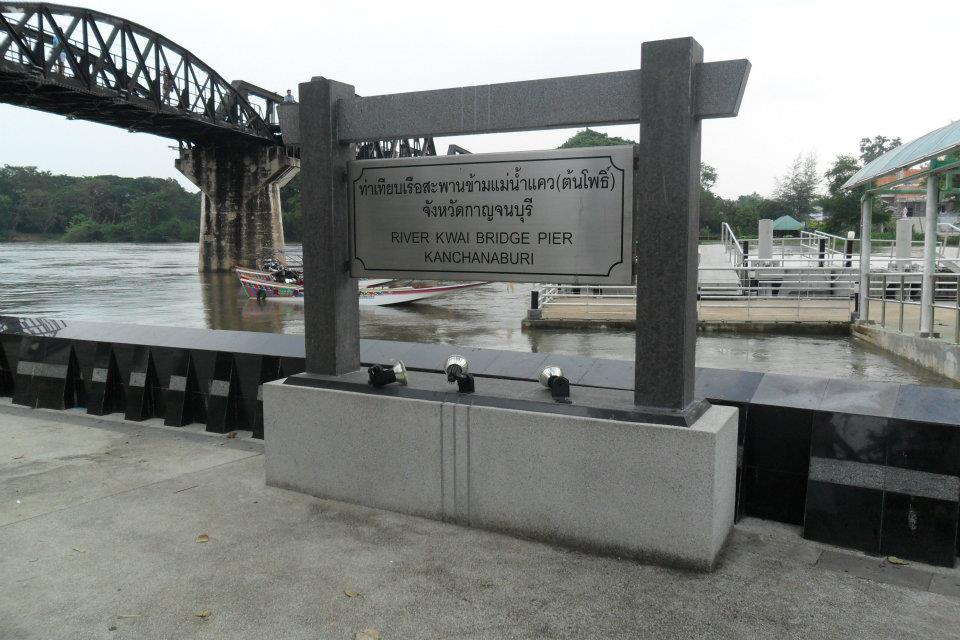 We stayed overnight at a gorgeous place on the edge of the river and went to a funky little bar that played Reggae music, it was out of the way and such a quiet place where we stayed but it was lovely waking up to the beautiful views! While we were in Kanchanburi we also visited Hellfire Pass and the Prisoner of War Museum. A lot of Thai history apart from the temples, is war based. It was very sad, but so interesting, plus there were a lot of British Solider’s that are represented there too which is nice to see, that even many miles from home they still have a place to lay. 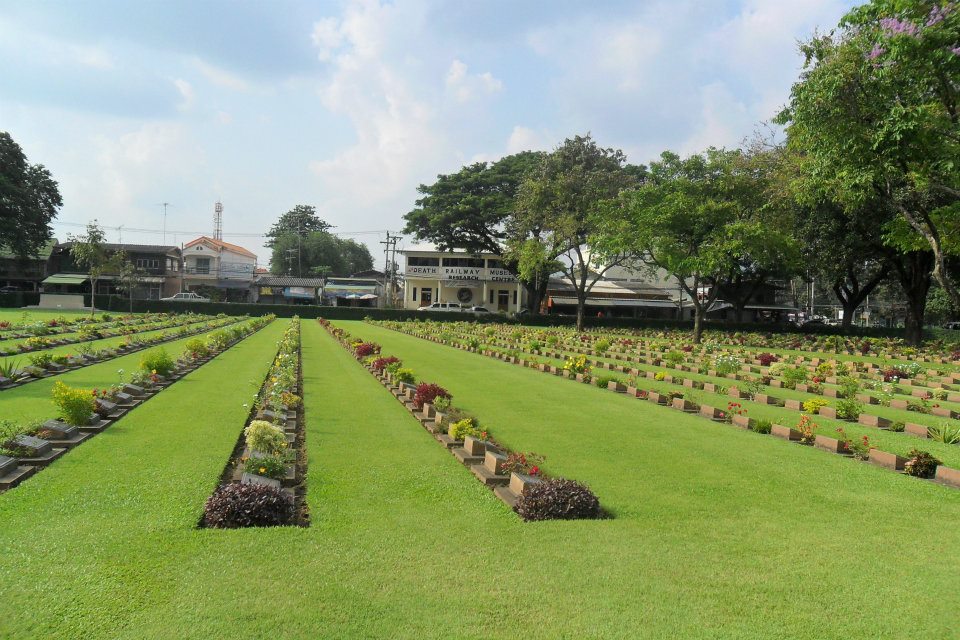 After the museum, we headed to Erawan Falls….and I was in LOVE! There are 7 levels of clear blue beautiful waterways and the Erawan waterfall, I only managed to get up to level 3 as the steps are so large, and on the third I went for a dip and slipped, spraining my ankle… In all honesty, I dramatically and comically tripped forward in my swim dress which ended up over my head and I was arse up, face down in front of a large crowd. I was horribly embarrassed. Then Monkey’s tried to steal my flip flops (that’s thongs to you Aussies)!! But, it did not spoil the day – it was beautiful. Incredible, I’d come back here. It was a long, hard day which I’m not used to, but I really enjoyed it. 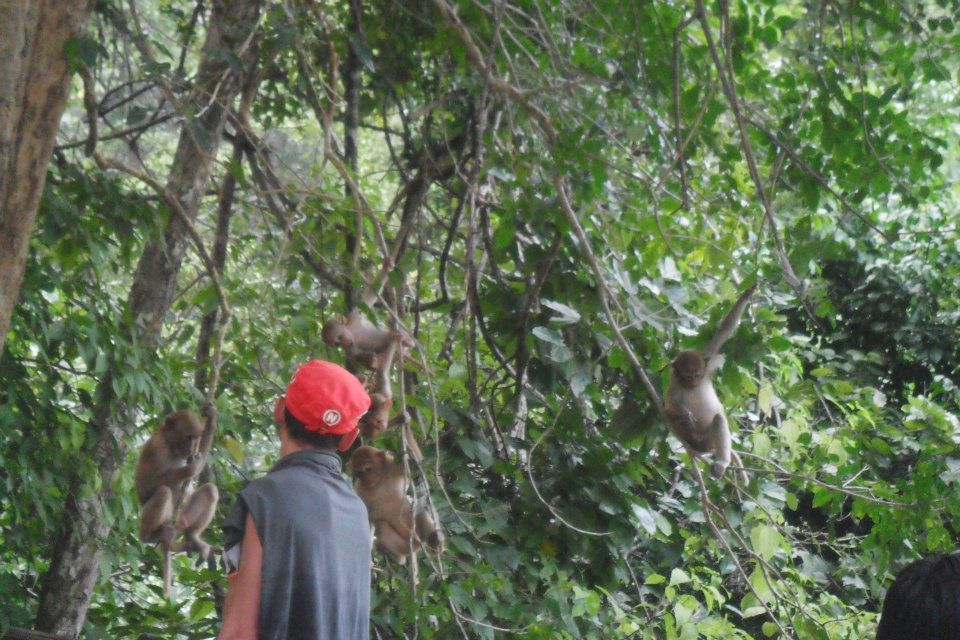 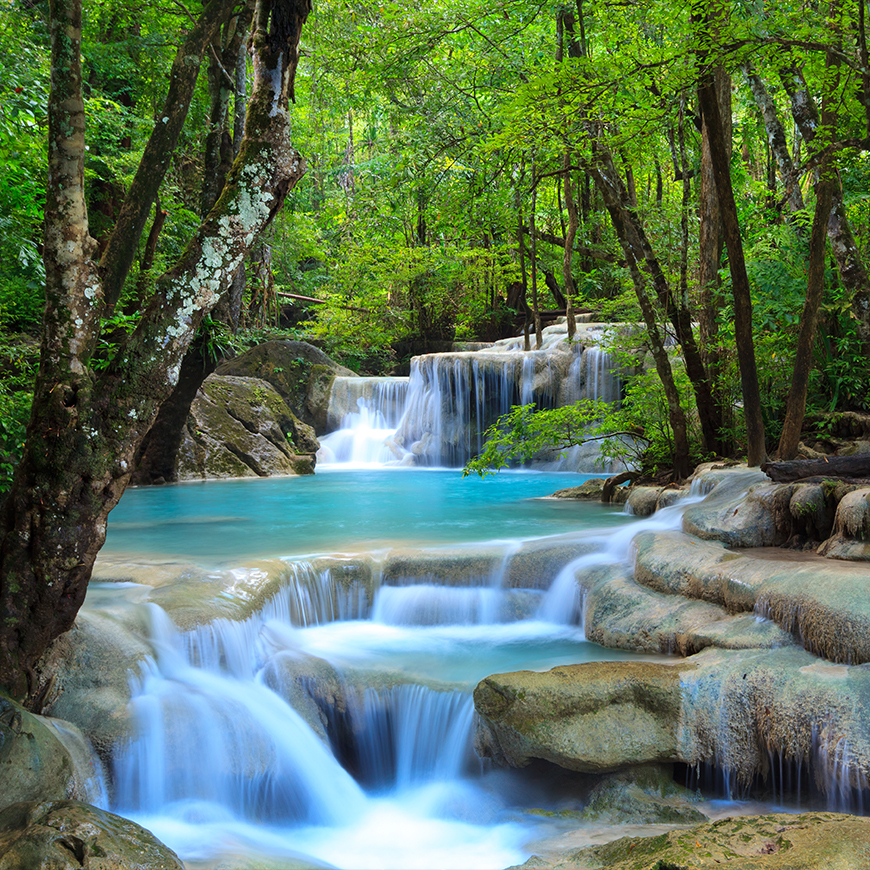 One thing I tried at Erawan Falls was Thai toilets. I hadn’t come across them until this point, so the hole in the floor with the feet marks either side was a little awkward to get used to, got to get good at squatting! When in rome….live like a local, right?

After a great few days, we were supposed to head to Ayutthaya, however due to the floods it was back to Bangkok for a night to catch the train to Chiang Mai. When we got there, the floods were so bad that the train was cancelled and we had to catch a 13hr bus instead. We were also informed that part of the southern tour was cancelled and we would have to fly to our next place as we won’t be able to get back into Bangkok otherwise – and we had to do this out of our own pocket which wasn’t the best news we’d had!

But…back to the trip. The bus ride….We were quickly being ushered out of Bangkok due to the floods getting worse and we arrived at the bus station, we could see that the ticket cost the tour company 288 baht, approx £6.50 (GBP) / $10 (AUD) for a 13hr journey and I know what your thinking….how awful is this going to be. I know that was my thought. But, WOW! I have never been so impressed by a bus in my entire life. It’s like flying business class…..we had huge recliner comfortable leather seats, there were TV screens on the bus, a luxury western toilet (thank you!), cold air con (winning!) and we got so many drinks and snacks. 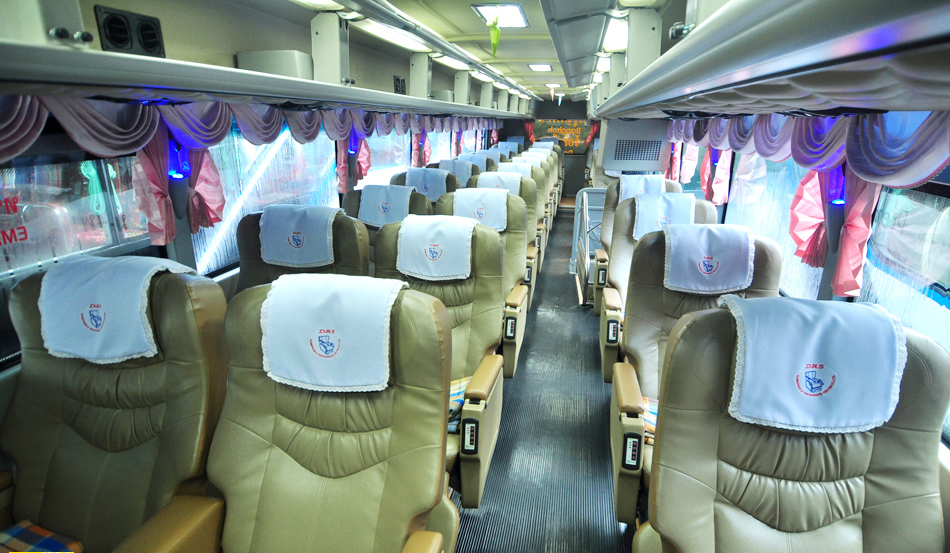 They played a Thai comedy once we were out of the flooded area, and even if you don’t understand Thai it was still fine to watch. This lead nicely to late evening time when we were fed – we got a box full of food and ice cold drinks. Once we had eaten it all, we were set to sleep with blankets and a pillow each, dark lighting on the bus and nice quiet areas, with individual curtains to pull across. We were offered drinks 2 more times during the night if you were awake and in the morning got muffin, yoghurt, fruit and iced tea. It was a smooth ride, so comfortable and the best bus experience I’ve ever had to date. I would highly recommend you checking it out (you may need google translate) http://www.greenbusthailand.com/website/

We got to Chiang Mai and had a walking tour through the old quarter of the city, followed by a visit to Wat Phra That Doi Suthep – the most revered Buddhist shrine in the Chiang Mai region. Back in Chiang Mai we headed over to the Chiang Mai Night Bazaar which is known as a shoppers’ paradise.

We had a free day so we took it easy, got ready to start our trek picking up any extras we needed. We went to an awesome food market there called Mae Malai that sold amazing foods, the food over here is so strange, but awesome! People eat sticky rice, which is actually so sticky that u put it into little balls n dip it in stuff n just eat it with ur hands! But people eat it with meat, as a dessert… we tried sticky rice that was baked in coconut milk in a bamboo shoot…gorgeous. Weird, but so nice! I’ve been trying more Thai food and it’s probably now some of my favourite food. 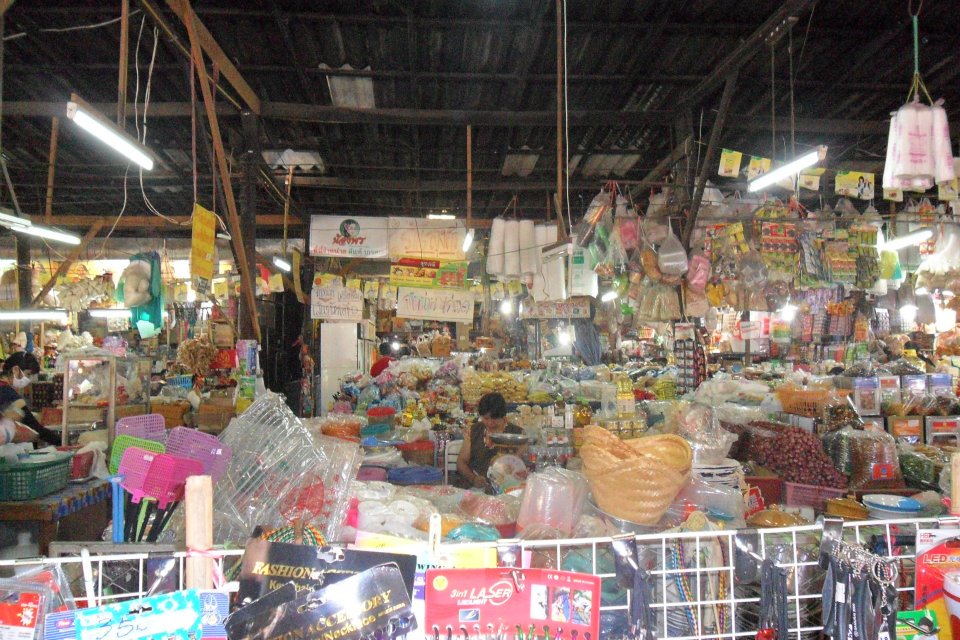 The night before the trek we went for a walk and had few drinks at a few cool bars, including a bar made from a VW Camper Van – Loveeeeee. We got to sleep pretty early and woke up for our 80km drive to the start of the trek adventure into the Chiang Dao region. We were walking for around 3-4hours each day on our 2 day adventure, but it was great fun! 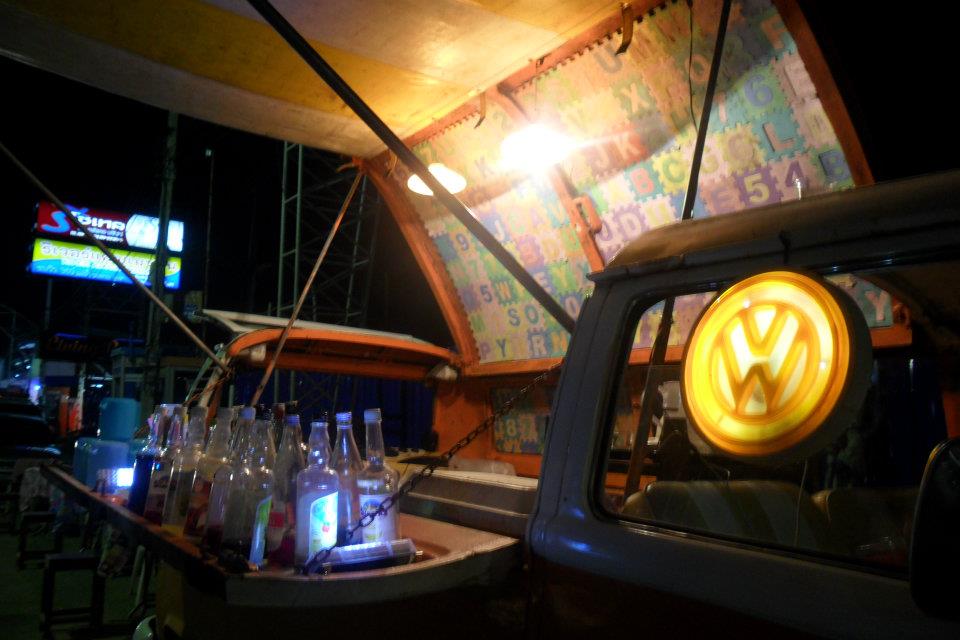 Read about the Hill Tribe Trek here! It was hard work, but SO worth it to learn about the culture of the tribe.

After the trek, we went back to Chiang Mai town for a day n half of not a lot really. We saw some gorgeous temples…but if I’m honest we saw so many templates that they began to all look the same. Although at the main one in Chiang Mai there was a huge festival going on for the Buddhist people because a local Monk had died, it was interesting to see how Buddhists take care of the people who have passed.

For the last night of the 1st half of the trip, we had a really good night in an Irish Bar and decided from there to go watch a cabaret show…. LADYBOYS!!!! 🙂 It was the BEST show, it was so fun!! Some of them were sooo obvious, some were gorgeous! Looked much better than me in a dress. 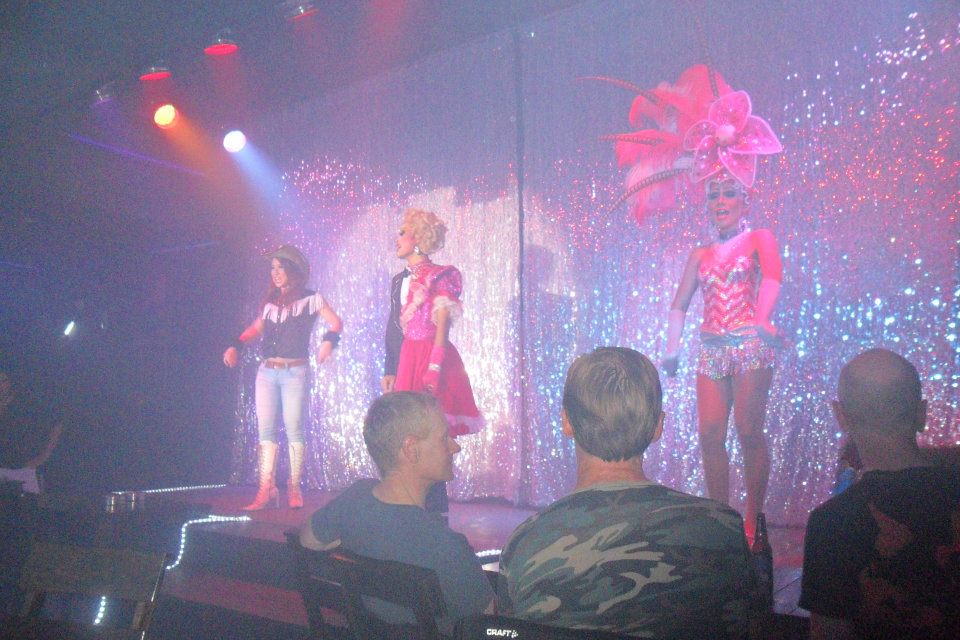 We finished the 1st trip by saying goodbye to Noi our tour guide (who I’d seriously recommend, he was awesome!) and make the massive trek to get to Koh Samui!

Find out more about the second half of our trip, Koh Samui, Food Poisoning, Khosak National Park and Krabi by subscribing below! 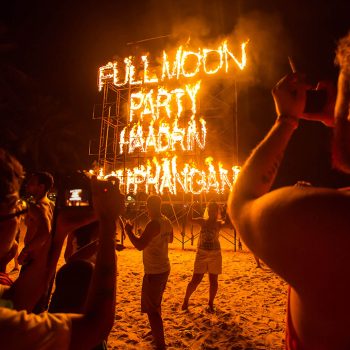